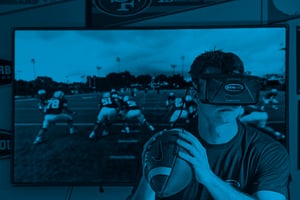 Just last week I attended a Toronto Blue Jays game, and like any typical fan, I found myself getting frustrated with the umpire, as they were calling a “ball” to what was clearly a strike! The more I got frustrated with the umpire’s bad calls, the more I started to think about the possible solutions they could implement to help officials (i.e. referees / umpires) make better calls during a game.

After the game I started to do some digging to figure out if this was something the Major League Baseball organization had thought of and to see what possible solutions they had come up with to address this common issue. Interestingly, I discovered that last year the MLB, the NFL and the NBA have all indeed asked themselves this question and have all started to explore the use of Virtual Reality (VR) as an additional training tool for their officials.

As the various leagues explored new avenues to better equip and train their officials, all three leagues decided that investing in VR was most valuable. The main reason, VR is able re-create certain elements of an environment that a video clip is just unable to capture. While using VR, training officials are able to better understand how to best communicate with one another in a noisy stadium as it becomes much harder to hear one another’s comments, they better understand how to maintain focus while fans in the crowd make negative comments towards them, and they better understand how to make swift decisions under pressure as the crowd loudly boos. These key important elements to officiating a real-live sports game is not at all captured when watching video clips, which is the current method the various leagues have been using as their main training tool. All three leagues see VR as a great source to create what feels like a real life scenario for officials to gain more experience off the field/court.

Since VR is still considered new technology, some often wonder what value VR offers outside of the realm of video games. If we look at how the sports industry plans to leverage the VR technology as an example, we can apply these same principles with VR in research.

VR is a valuable tool in research because:

Ultimately VR creates a sense of presence which is key as it engages the brain in a deeper way than people are used to and makes the brain respond as if you were actually there. As a result, VR helps researchers capture more true and genuine responses from participants.

I have always found this example quite amusing!
https://www.youtube.com/watch?v=HaWX0ib1Rss

I took a few minutes to ask Colin Anderson, our VP of Experience Design, to talk with me about his experience with using VR at Phase 5 and to tease out some of the key things he has learned along the way with using VR in a research context.

Q: “Colin, I know you have played a big role when it comes to using VR at Phase 5. What role do you see VR playing in research? How do you see this technology fitting in the research context?”

A: "The role we see it playing is to try and bring the user closer to the actual experience than they might otherwise get from traditional stimuli.

We would use VR for two major use cases. The first is testing environments. So these could be interior spaces (e.g. bank branches), these could even be streets for signage outside, or the aisle of a retail environment to see how a customer would shop. So elements that are hard to re-create faithfully and hard to get a representation in 2D media. The technology allows you to explore these environments in a natural way, and allow us to bring the user closer to the real-life context they would be in. For example, we could use VR to test alternate layouts of a retail location and within these alternate layouts we can test signage. So rather than showing images of signage, we can place signage in the place they would be found, fill the room with 20 people, have ambient noise, flashing lights or any other thing that would be in that environment and make sure it makes sense in that context.

The other big area of use outside of physical spaces, is testing physical devices. So when we think of user experience, we typically think of digital interfaces. VR allows us to test the design for physical devices without having to build physical prototypes. It’s also a great way to actually demonstrate prototypes that span both physical and digital spaces, such as ATM bank machines. And of course, in both uses cases, we can iterate very rapidly. So in a single study we can go through design iterations much more quickly than if we were testing a physical prototype or a demo site location”.

Q: "Some people worry that using VR is an extremely expensive and lengthy process for research. How would you respond?”

A: "The length of time it takes to build an environment or a VR prototype we want to test is often not that much longer than the time we factor in to do other research prep. work, such as recruitment, the development of discussion guides and that sort of thing. So it doesn’t add substantial time to a project as the VR design happens in parallel with other research prep work. Once the core of the VR stimulus is developed, we can easily make design modifications to allow for design iterations for rapid testing. And of course, all of this is dramatically faster and cheaper than actually constructing real test environments or physical prototypes.”

Q: "How do people typically respond to using the VR technology? What feedback do they often provide?”

A: “There is very little learning curve to people getting comfortable with the technology. Even those who have never used or never experienced it before typically become completely immersed in the environment within the first minute or so of the testing. Interacting and moving around the environment is extremely natural and comes quite naturally to people. The technology itself has also evolved a lot in the last few years, and some of the previous issues we used to see with some people feeling a little bit of motion sickness have dramatically dropped off with the latest iteration of VR technology. Most people come out of the sessions, having had a wonderful experience and are surprised by how natural it is!”

VR is an incredible useful piece of technology and its unique features offers many benefits, especially within the research context. With the added prototyping efficiencies for Agile teams, being able to capture more honest & true feedback from customers, and with the increased engagement from participants in research studies, why wouldn’t you want to use VR in your next research project!

As a Senior UX Consultant at Phase 5, Celine has a passion for user experience, with her work focusing on design research projects for clients in the financial services, telecommunications, non-profit and media sectors. Fully bilingual, Celine is an experienced interviewer in both English and French. A graduate from the University of Waterloo, Celine spent her undergrad developing her skills in research and management with an emphasis on collaboration and design thinking.